GM at The Pint Public House

There’s something about The Pint Public House that evokes a feeling of one of the world’s most famous bars−albeit on a much larger scale.

“What we’ve created is that fun Cheers atmosphere. You come in, sit down and the bartender shakes your hand,” says Chad Hubbs, general manager of this lively Gastown establishment. “Then we open up to be a party pub on the weekends. Not a nightclub, but with music people can sing along to.”

The Pint is part of an Alberta-based chainlet owned by Edmonton’s Urban Sparq Hospitality Group, which is set to open its seventh Pint and its first in Eastern Canada next year in downtown Toronto. Vancouver’s Pint opened on St. Patrick’s Day 2012 in the old Lotus Hotel, which formerly housed three establishments: Honey Lounge, Lick Club, and Lotus Sound Lounge. The Pint now fills all three areas, with an impressive capacity of 500 guests, and has become one of the city’s most popular weekend party destinations.

It’s the Urban Sparq formula−take a funky vintage building in an under-served part of town, renovate it, and transform it into a jumping hotspot where everyone wants to go.

Take a funky vintage building in an under-served part of town, renovate it, and transform it into a jumping hotspot where everyone wants to go.

The Pint Vancouver features rosy-coloured walls, glowing neon beer signs, dark wooden bars, warm lighting, and plenty of TV sets for an ambiance that is part traditional pub, part sports bar. In fact, Rogers Arena is only one and a half blocks away, so this is a natural destination for sports fans before, during and after games. “You can see the arena from our front door,” Chad says.

Part of what has made The Pint so successful is a keen understanding of the audience it’s trying to attract−young professionals, aged 25 to 40−and delivering exactly what those customers want.

It starts with the music−familiar tunes that are fun to dance to, not hip-hop, but what Chad calls “sing-along stuff”. That includes live music, such as that performed by Vancouver-based 1990s cover band The Flannels. “We have lots of 40th birthday parties and they all want to be near the dance floor,” Chad describes.

The Pint team also tries to think outside the box when it comes to events it organizes. “We hit the ball out of the park with some of them, like our Harry Potter Trivia Night,” Chad explains. “We’ve held it three times and sold out each time, with 250 or 300 people.”

Since the bar has such a large capacity, it makes it easy to hold larger gatherings like office parties, bachelorettes, fundraisers, and after-work drinks. Although The Pint charges a cover on the weekends (in part to discourage a younger, party-hearty clientele that brings with it a host of problems), it does not charge for big group bookings.

When it comes to food and drink, The Pint team knows their guests aren’t really there for a fancy dining experience. Certainly, anyone who’s there to watch the game doesn’t want to eat fussy main courses or drink a lot of heavy, high-alcohol craft ales. So they stick to what works: traditional pub fare, done with a bit of flair.

Unlike bars that specialize in craft beer and might have as many as 120 taps, The Pint has a well-edited 16 beers on tap. Of those, five or six could be considered craft; the rest are easy-drinking mainstream beers. 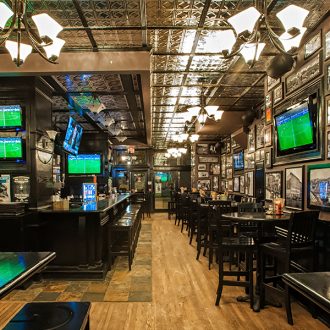 Their food menu hews to tradition as well. “We pride ourselves on our ribs and wings,” Chad says. “We have 40 different flavours of wings and we carry that over to our chicken fingers and ribs. The most popular dry rub is Kentucky bourbon, and for a sauce, it’s the honey-sriracha.” Plus they offer a free pound of wings with a pint of beer during the 3 to 6 pm weekday Happy Hour.

What really sets The Pint apart is its team’s willingness to go the extra mile in understanding and serving their clientele. “From the get-go I feel like we pound the pavement. We have really good specials that attract people and keep them coming back. We make them feel like they’re at home,” Chad notes. “We get butts in seats and have them leaving happy.”

It may not be Cheers, exactly, but it all goes to show why The Pint has become one of Vancouver’s favourite pubs.