by Mel Priestley on May 11th, 2017 under Liquor Stores People

From a wine-only import shop to the best selection of whisky this side of Europe, Kensington Wine Market has been offering Albertans a unique beverage alcohol selection for the past 25 years.

“We’re always on the hunt for things that are new and interesting that no one else has,” Kensington owner Andrew Ferguson says. “That’s really our business model: to set ourselves apart.”

Kensington Wine Market opened in 1992 in the now-trendy Kensington neighbourhood, walking distance from downtown Calgary. While it started as a wine-only store with an import licence, original owner Nancy Carten dropped the licence and switched to full-service shortly after the Alberta liquor industry was privatized in 1994. She remained the driving force behind the store for over 20 years, until Ferguson purchased it from her in 2015; she has stayed on during the transition to ensure a seamless process. 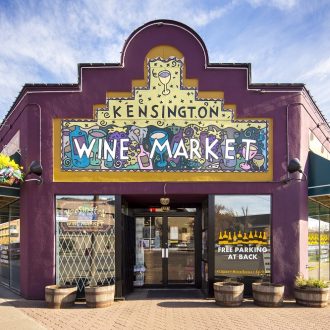 Ferguson didn’t know he was signing up for a 15-year career when he started working at Kensington as a holiday delivery driver in 2002. Over the course of his first year there, however, he began to see the potential to grow the store’s whisky selection – a focus that marked the second phase of the store’s evolution.

“I never set out to do that – it sort of happened organically,” Ferguson explains. “As interest picked up, we really put ourselves on the market as a unique destination for whisky – not the biggest retailer in the province necessarily, but the one that routinely had the most interesting selection.”

“After four or five years it really started to take off,” he continues. “I like to think we were really at the forefront of the boom and interest in single malt whisky especially, but we feature other types of whisky too, including Japanese whisky.”

Kensington has been recognized internationally for its whisky portfolio. For the last two years it took second place in Whisky Magazine’s Icons of Whisky Awards: In 2015, it lost to Berry Bros. & Rudd in London (a 300-year-old wine merchant that also owns the Glenrothes brand), and in 2016, it came in behind the Celtic Whiskey Shop in Dublin. Ferguson was the first retail whisky expert in Canada named a Keeper of the Quaich, an honour bestowed by the Scotch whisky industry.

Kensington has, as was recognized two years in a row, the second-best whisky shop in the world.

“That’s a story that I think most Calgarians don’t even know: Kensington has, as was recognized two years in a row, the second-best whisky shop in the world,” Ferguson says. 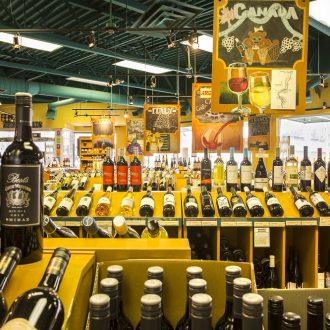 In addition to 1,200+ SKUs of whisky (943 of which are single malt), Kensington also bottles about eight or nine whisky casks exclusively for sale in the store. They rotate through 800 beers every year and have a growler tap of local craft beers that aren’t available in bottle or can.

And of course, Kensington’s wine selection is superb. Ferguson estimates that about 40% of their wines aren’t available anywhere else in the province. Despite the store’s increasing focus on whisky over his tenure, Ferguson has maintained Kensington’s status as a specialty wine boutique – it is right there in the name, after all.

“We brought a lot of wines to the market that had never been here before,” he says, reflecting on the store’s early days. “That was the business, even after privatization, probably for the first 15 years. People travel – not just all over Calgary, but over Alberta and really, Canada – to buy the things that they know they’re not going to find anywhere else.”

The retail landscape has changed significantly since Kensington opened. There has been a proliferation of liquor stores throughout the city and province. Kensington used to be the only store within two kilometres and now there are at least five others within a one-kilometre radius. In addition to their unique inventory, Ferguson identifies community engagement and the quality of their staff as key factors in their continued success. He doesn’t require staff to hold any designations or earn them while employed, but notes that most have industry experience – and they all have a great attitude.

Part of his desire to purchase the store was to ensure that their staff was taken care of, and to continue offering the community a high-quality, local liquor store.

“This has been a very rewarding place to work for the last 15 years,” he says. “If Nancy had sold it to a chain or someone else, what would have happened to the people that are here? It’s very important that this still remains a community shop and that the great people that we have working here have a future.”